In this Christmas season, games are popular in the shops and under the tree, but also spark fierce legal debates.

How to durably protect the games and prevent competitors from developing identical or similar games?

When launching a new game, manufacturers obviously think to file the game’s name as a trademark. The names of successful games (which can be considered as well-known) benefit from a broad protection. For example:

The forms, such as the game board, cards, visual characters, parts and figures, if new and having individual character, may be registered as designs on or before launching the game. But even if registered and renewed, a design may only last 25 years, as opposed to a trademark that can be renewed as many times as the owner wishes.

For this very reason, as a matter of course game makers seek to protect the appearance of their games by filing trademarks, in order to enjoy unlimited monopoly in time (3).

But legal provisions prevent the registration of signs which consist exclusively of:

Such is often the case for games, since it is precisely for their shapes (at least for building games), their colours, their appearance, or their mechanisms that they are chosen.

That is why such trademarks as game cards, trays (4) or, after years of legal battles, the famous LEGO bricks, have been cancelled.

The example of the famous Rubik’s cube, a 3D puzzle cube-shaped, is fairly representative of the difficulty of protecting a game by trademark law.

Several European trademarks have been filed during the last decade.

In 2007, the following trademark has been filed under the description “colour mark per se”:

The mark was refused given the uncertainties relating to the nature of the mark (5) on the ground that it was not a colour mark per se, but a three-dimensional mark, or figurative mark, which corresponds to the external appearance of a particular object with a specific form, that is to say a cube covered in squares with a particular arrangement of colours. The overall description of the mark, ambiguous and contradictory, led the court to refuse the registration of the trademark.

Besides, several figurative marks were filed, along with a detailed description (6), the signs consisting of more or less complex games with 4, 9, 16 or 25 squares on each side. 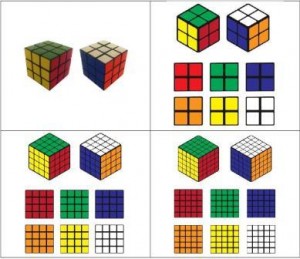 Those registered trademarks have been brought before the OHIM Cancellation division. Invalidity procedures are pending.

Finally, a B&W mark was filed in 1996 and registered for three-dimensional puzzles. 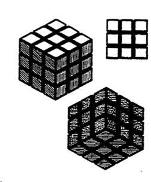 On 2006, a competitor filed a request for a declaration of invalidity against this trademark for lack of graphical representation, lack of distinctiveness, and sign consisting on a functional shape, the natural shape of a 3D puzzle and a shape which gives substantial value to the goods.

This trademark has just been validated by the General Court (7), which approves the decisions of the Cancellation Division and of the Board of Appeal, arguing that:

If the mark is validated by the General Court, its scope should nonetheless be very limited: “The contested mark may not be relied on by its proprietor in order to prohibit third parties from marketing three-dimensional puzzles that have a rotating capability. As is apparent from the foregoing reasoning, the registration of that mark does not have the effect of protecting a rotating capability which the shape in question allegedly possesses, but solely the shape of a cube the surfaces of which bear a grid structure, which gives it the appearance of a ‘black cage’. That mark cannot in particular prevent third parties from marketing three-dimensional puzzles that have a shape different from that of a cube or that have the shape of a cube but whose surfaces do not consist of a grid structure similar to that on the contested mark or any other similar motif, and prevent those puzzles from incorporating or not incorporating a rotating capability”.

Furthermore, proving the genuine use of this trademark could also be an issue since it was filed in black and white while the very principle of Rubik’s cube requires faces of 6 different colors and regarding the change of practice of OHIM and other patent and trademark offices concerning the use of trademarks in black and white (8).

When offices change the rules during the game…

(8) In a forthcoming article.