E.U. law allows shapes of goods to be registered as trademarks. If filed properly such trademarks may then provide their owners with exclusive legal protection, potentially unlimited in time, over shapes that may have required important conception and development investments.

But such three-dimensional trademarks must still be distinctive. This condition is interpreted very strictly by the OHIM, to preserve availability of descriptive or usual shapes, and to prevent individuals to use trademarks to perpetuate exclusive rights over natural forms, technical developments or aesthetic designs.

On July 12, 2012, the General Court of the European Union, in case T-323/11, refused to have the below-reproduced trademark representing the shape of a bottle registered in connection with beers (in Int. class 32). 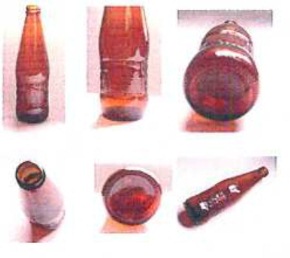 Because the average consumer is not used to presume of the origin of goods by referring to their shapes or wrappings, the Court considers that only a trademark significantly diverging from the commercial habits of the field in question could fulfill its role of indicating the origin of the goods and could then be deemed distinctive.

In this case, after carefully analyzing the shape filed as a trademark, the Court considered it was very common as compared to other shapes of identical or similar goods. It consequently stated it was devoid of any distinctive character.

It may then be inferred that only a shape presenting a certain degree of originality as opposed to what is traditionally known or made can be registered as a trademark.

But it is not enough for Article 7.1.e) of Council Regulation No.207/2009 on the Community trademark also states that “signs which consist exclusively of: (i) the shape which results from the nature of the goods themselves; (ii) the shape of goods which is necessary to obtain a technical result; (iii) the shape which gives substantial value to the goods” shall not be registered.

The idea is to prevent some to obtain a monopoly on technical solutions or functional characteristics of a product to the detriment of others.

That is why the General Court decided (Case T-164/11, 19 Sept. 2012) to cancel the below-reproduced trademark registration representing the shape of a knife handle (registered in connection with knife handles and knives). 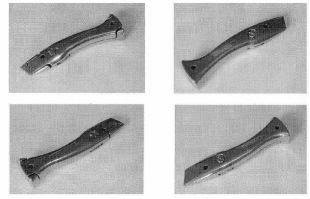 The Court interpreted Article 7.1.e)ii) above as precluding “registration of any shape consisting exclusively, in its essential characteristics, of the shape of the goods which is technically causal of, and sufficient to obtain, the intended technical result, even if that result can be achieved by other shapes using the same or another technical solution”.

However shapes of goods in which a non-functional element, such as a decorative or imaginative element, plays an important role can still be registered as 3D trademarks.

In this case, most of the essential features of the shape of the knife handle were claimed in an expired American patent for their technical functions. Such circumstance was duly taken into account by the Court which concluded “that the most important elements of the disputed sign, constituting its essential characteristics, are all exclusively functional” and held that “ornamental elements [of the sign could not be] regarded as being capable of constituting the essential characteristics of the trade mark” or that such ornamental features were “conditioned by elements having a technical function”.

In conclusion, provisions of trademark law must not be used to protect technical characteristics of goods. For such purpose, one needs to appeal to the patent legal system.

As the Advocate General Colomer said, “the public interest should not have to tolerate even a slight risk that trade mark rights unduly encroach on the field of other exclusive rights which are limited in time, whilst there are in fact other effective ways in which manufacturers may indicate the origin of a product (addition of arbitrary features to a three-dimensional shape, innovative arrangement of the whole, word and figurative marks)” (Opinion delivered on October 24, 2002 in Case C-53/01).