In 2014, we told you about the surprising case of photographer David J. Slater and the famous Monkey Selfies (here).

David Slater had filed a take-down request to remove from Wikimedia the photographs he had brought back from Indonesia. At that time, Wikimedia rejected the request considering that the photographs were taken by monkeys, crested black macaques, and that no copyright could subsist in a work created by an animal.

But there was another case. A few months later, David Slater and Wildlife Personalities published the Monkey Selfies in a book which identified them as the copyright owners of the photographs. In the book, David Slater explained how he succeeded to interact with the monkeys and how they grabbed his camera and took the pictures. 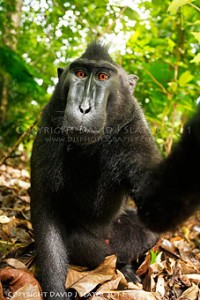 When the book was released in 2015, People for the Ethical Treatment of Animals, known as PETA, filed a complaint for copyright infringement against David Slater and Wildlife Personalities as Next Friends on behalf of Naruto, the main character of the shooting session.

For the Court, PETA cannot “validly assert “next friend” status to represent claims made for the monkey both (1) because PETA has failed to allege any facts to establish the required significant relationship between a next friend and a real party in interest and (2) because an animal cannot be represented, under our laws, by a “next friend”.”

Following the Supreme Court in Whitmore v. Arkansas (495 U.S. 149 in 1990), the 9th Circuit Court would not “recognize the right of next friends to bring suit on behalf of animals, absent express authorization from Congress”. Cases normally involve minor or incompetent persons.

The Court went even further and proceeded to the merits because the lack of a next friend does not destroy a party’s his standing to sue. The court must still consider if such party, e.g. Naruto, is adequately protected.

According to the Court, the complaint filed on Naruto’s behalf included facts sufficient to establish Article III standing (the complaint alleged that Naruto was the author and owner of the Monkey Selfies and that he had suffered concrete and particularized economic harms as a result of the infringing conduct by David Slater and Wildlife Personalities). So the question really was: does Naruto have statutory standing to sue for copyright infringement?

And the Court’s answer is no. Following Cetacean Community. v. Bush (386 F.3d 1169, 1175, 9th Cir. 2004), it was confirmed that the Copyright Act does not expressly authorize animals to file copyright infringement suits. Moreover, the 9th Circuit Court pointed out that when the Copyright Act only referred to humans as owners of copyright, never to animals. It concluded “that Naruto—and, more broadly, animals other than humans—lack statutory standing to sue under the Copyright Act”.

The lesson seems clear, at least for now. An animal cannot own copyright.